For the young and the not so young, situated somewhere between modernity and vintage, the LEGO brick never goes out of style and is not affected by the crisis.

A single object that intrinsically contains infinite possibilities through its multiplicity, it inspires or reawakens an irrepressible desire to play, invent and dream in anyone who picks one up! What’s more difficult to resist than the attraction of the colors and shapes of a pile of LEGO bricks we find in our way?

The Art of The Brick fuels the public’s obsession for the little brick by placing creativity and playfulness at the core of the exhibition. It starts with the artist’s creativity, but it calls on the visitor’s creativity too. The works on show are only examples and a tiny part of what the visitor can do with LEGO bricks!

If the beauty of the artworks presented at The Art of The Brick attracts the public, it’s above all their great creative potential that fascinates both young and old. 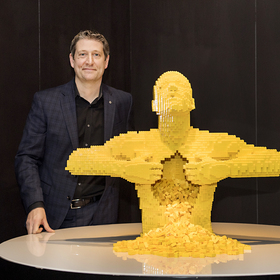